In a new piece for the Players’ Tribune, Corey Hirsch opens up about his struggles with mental health issues. (Ryan Remiorz/CP)

A great article by

For a long time, Corey Hirsch was overcome with dark thoughts.

In a new piece for the Players’ Tribune, the former NHL goaltender opens up about his struggles with mental health issues.

At age 22, Hirsch seemingly had it all: He’d earned an Olympic silver medal with Team Canada, and, as the New York Rangers’ third goalie, he’d been part of a Stanley Cup championship. But the goaltender felt suicidal. As he describes it in the Players’ Tribune, it was a feeling of overwhelming darkness disconnected from his outer life. “Darkness. Pure, relentless darkness,” Hirsch writes. “For no reason.”

The pain was so bad that, while with the Rangers, Hirsch tried to break his hand, hoping to be sent home to Calgary.

After the morning skate, I grabbed an extra stick blade from the bin and stuffed it in my bag. When I got back to my hotel, I sat on the edge of the bed in silence and took out the blade.

My plan was to break my hand and hide the injury until the next day at practice. That way, I could go down after taking a shot, and the team would send me home to recover without knowing what was really going on. In those days, the blades were wooden and heavy as hell. I smashed the blade against my left hand three or four times, as hard as I possibly could.

It didn’t work. Hirsch ended up with a badly bruised hand instead, and he stayed with the Rangers right up until the team hoisted the Cup. The next day, he promptly flew home.

Hirsch’s struggles continued, and he was traded to the Vancouver Canucks. On an East Coast road trip, Hirsch pulled a trainer aside to ask for help. After one meeting with the team’s psychologist, Hirsch finally had a diagnosis: obsessive compulsive disorder. 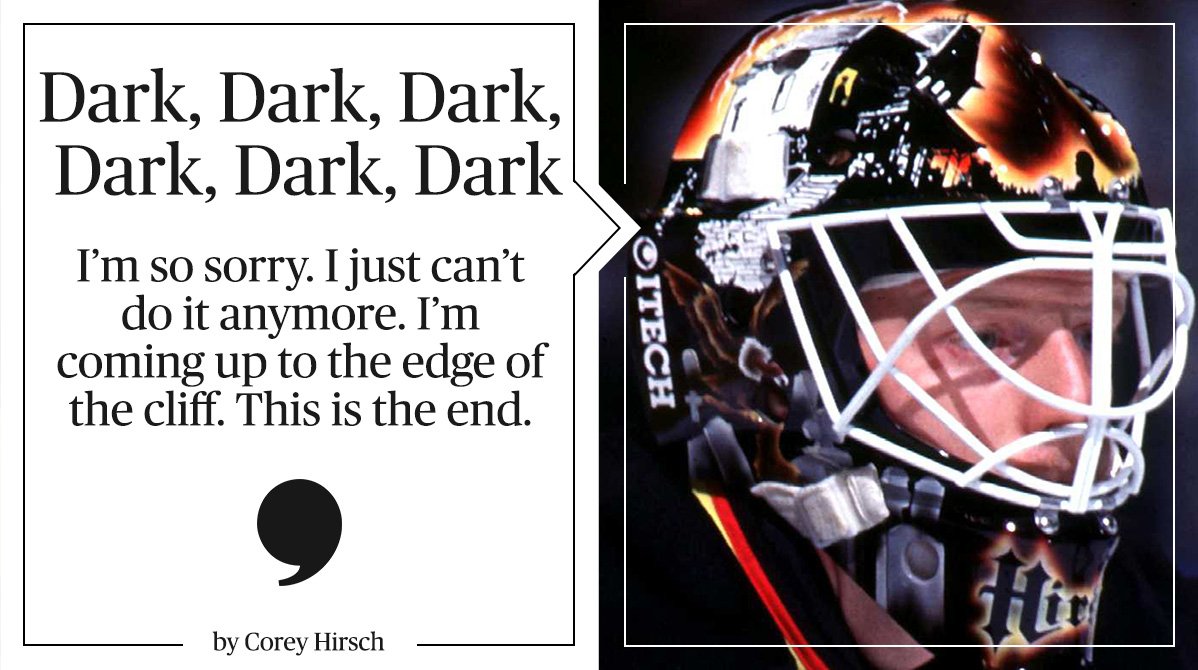 “In our society, OCD has become shorthand for anybody who carries around a little bottle of hand sanitizer,” Hirsch writes. He outlines some common misconceptions about the illness, and explains that, in many cases, the compulsions brought on by the illness are entirely mental.

Having a diagnosis came as a huge relief. Finally, he thought: “I am not insane. I am not a bad person. I am not weak. I have an illness, and there is a treatment.”

But a diagnosis wasn’t a magic fix. “I had good stretches and bad stretches,” he writes. But Hirsch continued to play professional hockey for another nine years. In other wordsm the illness didn’t stop him.

His key message? “A mental health issue is not a sign of weakness.”

For hockey players, struggles with mental health can be especially difficult to reveal. But Hirsch implores anyone who can relate to his struggles to find hope.

“There is a light, however faint, in all this darkness,” he writes. “There is help out there for you.”